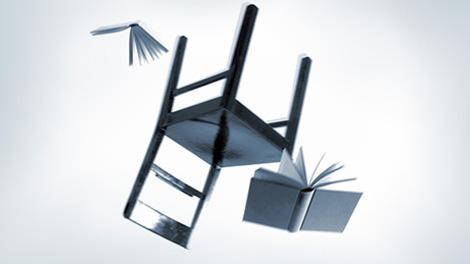 Our English book club will meet once a month in a relaxed atmosphere. You are welcome to bring refreshments from the library café into the circle. Each time I will provide an introduction to the book, the author and the reception it achieved. We will focus on the themes and message and sometimes consider the language. You are encouraged to bring your questions to the meetings and tell us why you love or can’t get along with the book.

“Swing Time tells the story of an unnamed narrator: a woman born and raised in the public-housing estates in Northwest London in the 1970s and ’80s, the child of a black mother and a white father. After being fired from her job as the personal assistant of an age-defying pop star, Aimee, "the narrator is left to reflect and, possibly, repent.... The story of self that follows is told through stories of others. Memories of four women—her mother, Aimee, and two friends, Tracey and Hawa—mark the path from her past to her present... Interpersonal tensions give rise to smart observations—about identity, dance, women’s work, and cultural appropriation, and about two themes that have long been central to Smith’s work: blackness, and the fantasy of pure and discernible roots." (The Atlantic)

The eccentric Lucy Angkatell has invited the Christows, along with a number of other members of herextended family, to her and Sir Richard's estate for a weekend. John Christow, a successful doctor andresearcher, is already having an affair with Henrietta Savernake, a talented sculptor and, as is demons-trated by what follows, brilliant improviser. He has always remembered with nostalgia an early love,Veronica Cray, who suddenly appears in the house on Saturday night asking to borrow a box of mat-ches. She is living at one of the two nearby cottages, the other of which is currently occupied by Her-cule Poirot, who has been invited for lunch on Sunday. Poirot arrives at the house to witness a scenethat seems strangely staged. Gerda Christow is standing with a gun in her hand above the body ofJohn, who is bleeding into the swimming pool. But John's last word is "Henrietta".

Virginia Woolfs novel Mrs. Dalloway was published in 1925. It examines one day in the life of Clarissa Dalloway, an upper-class Londoner married to a member of Parliament. Mrs. Dalloway is essentially plotless; what action there is takes place mainly in the characters’ consciousness. The novel addresses the nature of time in personal experience through multiple interwoven stories, particularly that of Clarissa as she prepares for and hosts a party and that of the mentally damaged war veteran Septimus Warren Smith. The two characters can be seen as foils for each other. (Britannica)